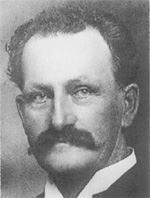 Bristol's first police chief, Howard G. Arms, served as sheriff before the department was created by the city burgesses on November 20, 1893. At that meeting the board, the precursor to the city council, adopted the recommendation of the special committee on police that a chief and three policemen be hired. The new police chief would get a headquarters and a telephone for his official and personal use as compensation. A year later, Arms' pay was established at $21 a week and he was issued a uniform. The first policemen, two night officers and a Sunday patrolman, were paid 25 cents an hour. Chief Arms retired on April 1, 1906.