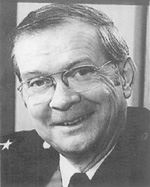 In August 1978, the Police Board and City Council looked to the state's capital for its seventh police chief. John F. Oliver joined the Hartford Police Department in 1953. by 1971 he had risen through the ranks to become captain. When Oliver became chief of the Bristol Police Department in 1978, he said he was attracted to the city's "small town ambiance". But just two years later, the city became the scene of a statewide motorcycle rally protest over the light sentence of a former state legislator got for his involvement in a car crash that killed a biker. More than 500 motorcyclists descended on the city for what Oliver would recall as a standoff, with the crowd taunting police. Chief Oliver who developed heart problems, left on disability retirement in 1989.