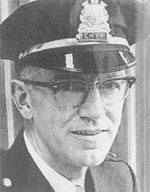 One month after Chief McCarthy called it quits, the PD was rocked by the worst scandal in its 71 year history. Ten officers and supervisors were suspended, and many ultimately fired or forced to resign, after an anonymous tip from a milkman was delivered to Mayor James P. Casey about a burglary ring involving city cops. It was in that setting that Lt. Robert Grace assumed the position of chief in 1964. Because of his short tenure as chief, the library's archives pay only passing attention to Chief Grace. His successor, however, later would recall the day in 1945 when two patrolmen; Grace, and Patrolman Mead, parlayed an otherwise routine accident investigation into the apprehension of the so-called "Silk Stocking Gang". Police departments throughout the state had been looking for the bandits who flipped their car on Wolcott Street. The two officers got a week off with pay. Chief Grace's first wife, Erma who became the city's first policewoman in 1960 - died in 1965. Chief Grace retired a year later.