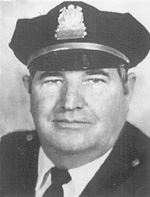 In July 1942, eight months after the U.S. entered World War II, a 24 year old pipe fitter for New Departure-Hyatt followed his father's footsteps and became a Bristol police officer. He and Patrolman Grace apprehended the notorious "Silk Stocking Gang" in 1945 and were rewarded with a week off with pay. Mead was captain when the 1964 burglary scandal erupted. He said in a 1978 interview that the city "got rid of some bad apples". Chief Mead rode out several political storms, including a 1974 ouster attempt by the mayor, and protests from the black community over the shooting death of a shoplifting suspect by a police officer in 1971. Mead died in February, 1999. He was remembered fondly at his funeral by working and retired officers alike, as a chief who proudly fought to improve the department's image.