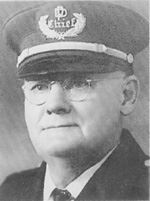 At the age of 26, Earnest T. Belden joined the force as a supernumerary in 1896, rising quickly through the ranks and becoming the departments first captain. When it needed a chief, the city looked to the Minnesota native to lead the young force. He did so for 36 years. Among other innovations, Belden was there when the city purchased its first police car in 1921 and when an early pistol range was established in 1937. Several used cars were looked at, but the city opted instead for a brand new Hudson touring car with a $2,500 price tag its first "cruiser". Belden attended funerals for two police officers under his command who were killed in the line of duty by gunmen - James McNamee in 1930 and James Burns in 1941. Chief Belden retired in 1942 at the age of 72.