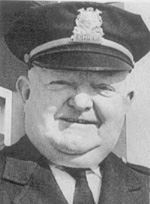 Born in Bristol on August 23, 1899, Thomas V. McCarthy held virtually every position in the department before being named chief. First appointed supernumerary in 1924, he became a regular patrolman two years later; a sergeant in 1941, lieutenant in 1944, captain in 1955, and chief upon Crowley's retirement in 1956. In the 1940's and 50's, McCarthy worked on four sensational murder cases while assigned to the detective division. McCarthy was 56 when he became Police Chief. He died in 1974, 10 years after his retirement.